Although pollution is usually thought of as being the addition of some harmful pollutant or chemical to water, pollution is really the addition of any substance or energy that causes harm to living resources, poses a hazard to human health, hinders aquatic activities such as fishing, or impairs water quality.[2] For more on what pollution is, click here.

There are several different ways that the use of water to produce electricity pollutes the water, either as a direct result of the action of the dam itself or as a by-product of the creation of a reservoir or the redirection of water systems. These effects are summarized below. 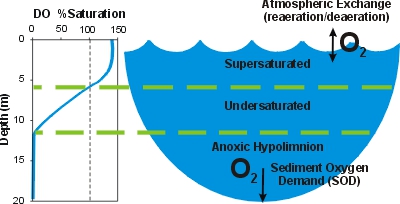 Figure 1. A diagram showing how dissolved oxygen content decreases rapidly with water depth. Areas at the top of the reservoir are oxygen-rich, but depth leads to oxygen depletion. Note that such depths are not reached in rivers, which is part of why rivers do not suffer from oxygen stratification.[3]

The formation of a reservoir, which remains much more still than the river that existed before it, results in the formation of layers within the water. These layers have discrete levels of oxygen, with higher concentrations at the top and lower concentrations at the bottom. These parts of the reservoir that are lacking in water are known as hypoxic areas. Concentrations of oxygen in the water can even become almost zero if the reservoir is deep enough, these areas are known as anoxic areas. This is largely due to organic sediments in the bottom of the reservoir being decomposed by micro-organisms, which uses oxygen. This reduced oxygen area is not healthy for any aquatic life living in the reservoir area.[4]

This water is then drawn into the turbine from the bottom, oxygen-poor layer of the reservoir and flows downstream. This reduces the overall oxygen content of the stream or river beyond the dam as well. This is problematic, as only minute decreases in oxygen causes complications in the ecosystem.[4] 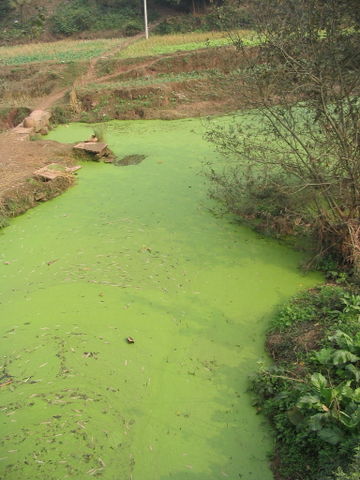 Reservoirs often undergo eutrophication - the enrichment of water with chemical nutrients such as nitrogen and phosphorous - because of how efficiently they trap particulates.[6] As well, the long residence time of the water in the reservoir also contributes to the frequent eutrophication. When combined with the lack of movement of this water, reservoirs frequently are sites of algal blooms. When algae population explodes, water quality suffers. This occurs when the algae die and are decomposed by micro-organisms in the water. When the algae decompose, oxygen is used and oxygen-poor or hypoxic environments form. As mentioned above, hypoxic environments have a negative effect on marine life and can cause fish deaths if left unchecked.[6]

In addition to poor oxygen conditions, the taste, colour, and odour of water are all negatively impacted by the presence of algae, making the water unsuitable for human consumption. Furthermore, some types of algae are poisonous and can negatively impact human health if consumed. Increased algal concentrations can also cause premature clogging of filters/traps due to the increased organic content, decreased biodiversity resulting from lower dissolved oxygen levels, and an increase in the concentrations of hydrogen sulfide, iron, manganese, and ammonia resulting from anaerobic decomposition of algae.[7]

Thermal pollution is just as much of a problem as oxygen stratification. In a reservoir, thermal energy accumulates in the top layers closest to the Sun, while the rest of the reservoir gets progressively colder. Water can then be drawn into the turbine through a penstock located at the bottom of the reservoir, altering the temperature of the water downstream. Drastic enough temperature changes can cause direct casualties in marine populations, but even minor changes can alter metabolic rates, reproduction, and growth of animals.[8]

When land is flooded to create a reservoir, it is unsuitable for farming, wildlife habitat, or human recreation. Mercury enters the water when elemental mercury found in the rock and soil of the reservoir interacts with bacteria released as a result of decomposition of submerged plant material. This interaction results in the formation of either mono-methylmercury or the more volatile di-methylmercury.[9] Both of these forms of mercury are water-soluble and will begin to accumulate within the water system. Unlike a creek or a river, the long residence time of the reservoir allows mercury concentrations to increase in the water system. This mercury will then begin to biomagnify within the food chain, eventually posing a health risk to people who rely on fish as a food source.