The weather and climate on Earth are dictated by the amount of incoming energy from the Sun. Earth's energy budget explains that if the incoming and outgoing radiation are equal, then the climate is in equilibrium. This balance is achieved or not achieved depending on how this incoming energy interacts with the Earth and objects on it through phenomena such as scattering, reflection, absorption, and energy transformations. Energy can be converted, transported and stored in a variety of forms. Overall, how energy acts once it has reached the Earth plays a significant role in Earth's climate. Energy flows are the energy transformations and movement that occur once energy has reached the Earth. These flows describe how energy is distributed and how it interacts with objects, determining certain climate properties.[1] 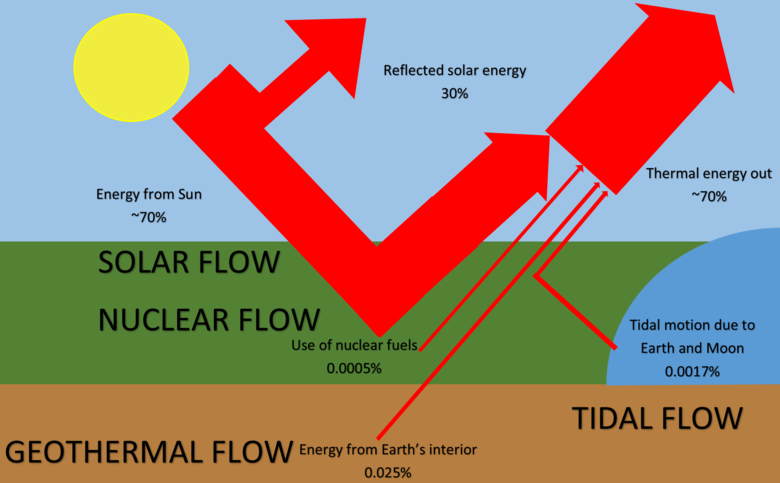 All of the energy that is incident upon the Earth acts in different ways. 30% of this solar energy is reflected, and the remaining 70% moves in different forms and pathways. The majority of the energy that the Earth receives is from the Sun, only 0.03% comes from other sources (as seen in Figure 1). This makes the solar flow the most dominant energy flow. In total, 174,000 TW of power—that's the energy of roughly 4 million tonnes of oil every second—is incident upon the Earth. While this is a small portion of the 410,000,000,000,000 TW of power the Sun puts out in all directions, it is still a great deal of energy.

Flows on the Earths Surface

Although the solar energy flow is the most dominant flow, it is not the only source of energy on the Earth. Energy from the use of nuclear fuels, as well as energy due to the tides and the thermal energy from the centre of the Earth all contribute to the total energy on the Earth. Although these flows contribute much less, they are still vital to ensure that the Earth is in an energy balance. 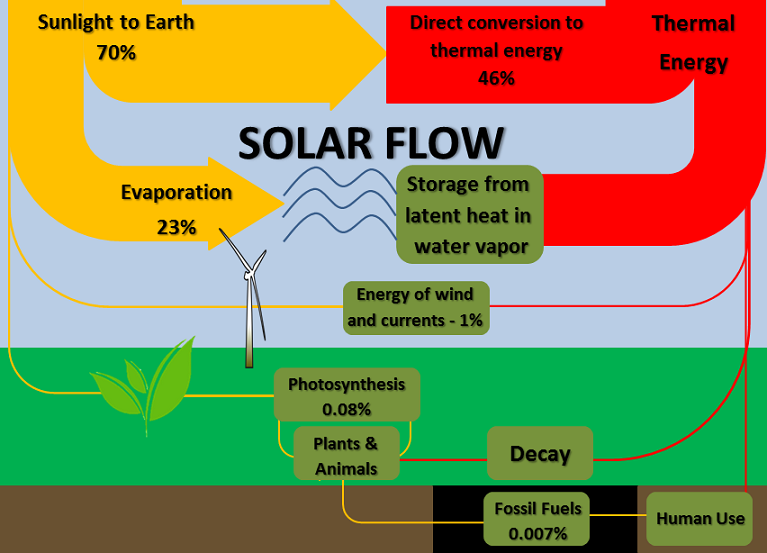 From the 174 000 TW delivered to Earth, an average value of [math]1367 \frac{W}{m^2}[/math] is determined to be the power incident on one square meter located at a fixed location outside Earth's atmosphere. However, this value averaged over the entire planet becomes [math]340 \frac{W}{m^2}[/math]. See this page for a more thorough derivation of these values. Of this power, approximately 30% is reflected back into space with reflection due to the atmosphere, clouds, the ocean, land and ice.[3]

The remaining 120 000 TW, or approximately 70% of the initial energy, that reaches the surface of the Earth comes down and warms the atmosphere.[3] This portion of the pathway can be seen in Figure 2. In the atmosphere, greenhouse gas molecules absorb this thermal energy, and their temperatures rise. After this absorption, the gases radiate thermal energy back out in all directions. This thermal energy then radiates back out into space. It is this phenomenon that warms the surface through the natural greenhouse effect.[4] Approximately 78 300 TW of energy are used to keep the atmosphere warm in this manner, resulting in the average temperature staying at 15°C or 288 K. From the original incoming energy, approximately 23% or 40,000 TW[3] evaporates water and runs the hydrologic cycle. Here, liquid water molecules absorb incoming energy and change phase from liquid to gas. The energy it took to evaporate this water is then latent in the motion of the vapour molecules.[4] The molecules can then condense—creating rain, snow, and sleet which drives rivers, runoff and cloud formation—then releases the latent heat into the atmosphere. This allows hydropower to capture energy as well, of which humans use ~ 1 TW.[5]

Roughly 1%,[3] or 1700 TW is turned into the energy of wind and ocean currents. This moves air and water all over the planet, which transfers the heat held in the motion of the molecules of the gas or liquid.

A very small amount (only around 0.08% or 140 TW) of the initial energy gets captured by photosynthesis, giving energy to plants.[3] This photosynthesis then allows plants to absorb carbon from the atmosphere in the form of carbon dioxide.Almost all the energy used to power life comes from this 140 TW. Plants get their energy from this photosynthesis and then animals either eat plants to get this energy, or eat animals that eat these plants to get this energy. When the plants and animals die, they may become fossil fuels. However, it takes a significant time (millions of years) for this to occur. Although the formation of fossil fuels isn't straightforward, most of the chemical energy stored in these plants and animals decays to thermal energy in the atmosphere.[3] The fossil fuels used by humans amount to about 14 TW (of the 16 TW of primary energy used by humans).[5]

In addition to solar flow, nuclear flow contributes to the overall energy on the Earth. Humans use around 1 TW of nuclear fuels,[5] and this energy does not originate from the Sun. Instead, nuclear fuels are left over from the explosion that started the solar system. This 1 TW is part of the 0.02% that doesn't come from the sun.

As well, the geothermal flow is another energy source that doesn't originate from the Sun. The geothermal energy coming through the Earth's crust is roughly 44 TW or approximately 0.025%.[3] The rest of the power that doesn't come from the Sun is the ~3 TW or 0.0017% coming from tidal forces acting between the Earth and Moon.[3] This small flow is known as the tidal flow.

The Earth then radiates power from all of the flows back into space in the form of thermal radiation. The Earth stays nearly totally balanced in terms of its temperature due to how the flows interact with each other and how solar energy reaches the Earth. This is due to Earth's energy budget. Increases in greenhouse gases like carbon dioxide and methane are leading to slightly less heat being radiated into space than the amount of energy coming in. This difference amounts to roughly [math]1 \frac{W}{m^2}[/math], a very small difference. Over several decades this [math]1 \frac{W}{m^2}[/math] has led to a warming climate especially warmer oceans, even though it is a seemingly insignificant power, equating to the output of roughly 1 Christmas tree light for every square meter of Earth's surface.[3]