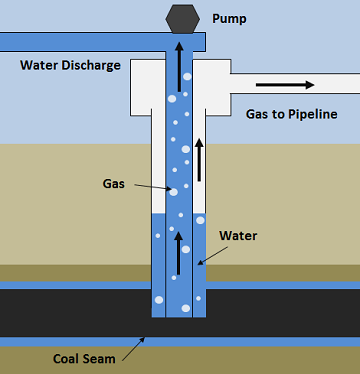 Coal bed methane is methane trapped in underground coal seams. This type of methane can be accessed using drilling techniques similar to those used in the collection of shale gas. In these deposits, the methane is attached to the surface of the coal. Generally, the seams are also covered in water which must be pumped out to obtain the methane. Pumping out the water reduces the pressure level and allows methane to escape from the seam.[2]

Coal bed methane is considered an unconventional gas as it is held tightly in reservoirs and it requires special stimulation and technologies to produce it economically.[3]

Coal bed methane forms at the same time coal forms. As organic material dies and is deposited in swamps or swampy lakes, the material undergoes bacterial and chemical changes to create peat deposits. Over millions of years, this peat gets buried under many layers of sediment the pressure and temperature of the peat increases. Gradually, the peat turns into lignite or brown coal, then sub-bituminous coal, bituminous coal, and finally hard anthracite coal.[3] While coal is being formed, the decomposing organic material produces methane gas - the main component of natural gas - along with nitrogen and carbon dioxide. With the pressure of being buried under sediment, most of the methane stays trapped on the surface of the coal.

Coal bed methane is considered to be an unconventional resource because it's difficult to access. The extraction of coal bed methane is similar to the extraction of shale gas. First, a well is drilled into a coal seam. Then the sides of the well are cased with a cemented steel pipe, and small holes known as perforations are made in the walls of the casing in order to allow the methane gas to flow into the bore hole and up the well to the surface.[3] These wells are often drilled horizontally to gain access to difficult to reach coal seams. As well, for methane that is attached tightly to the coal seam the seams are generally fractured to allow the gas to flow freely.[3] Some seams produce less water than others, and these are known as "dry coal bed methane wells". After the coal bed methane gas is removed, the coal seam remains and can be mined later on.[5]

One major issue in trying to extract this kind of methane is the amount of water that must be removed from the coal seam in order to remove any significant quantities of methane.[4] The pollution of ground water and run-off is a major concern simply because water is produced in large volumes and must be disposed of safely. Generally water is re-injected into underground rock formations, and sometimes it is allowed to flow to the surface to drain or put in evaporation ponds.[6] As well, some of this water - especially from deeper wells - may be salinated and cannot be released without harm to the environment. Instead, the salts must be separated from the water.[7]

Another concern is the increase of methane in the atmosphere. Atmospheric methane has been increasing at a rate of 1 percent per year during the past 15 years[6] Although accessing coal bed methane does release methane into the atmosphere, some argue that the production of coal bed methane actually reduces methane emissions by removing the gas that would otherwise be released during coal mining.[6]

Methane migration is another potential concern as in some areas the movement of methane may have contaminated ground water sources and migrated into residential areas. Although some of this contamination may come from migration along natural fractures, but some may come from the fracturing in the wells. One issue with this contamination may be the proximity of residential areas to these new wells.[6]