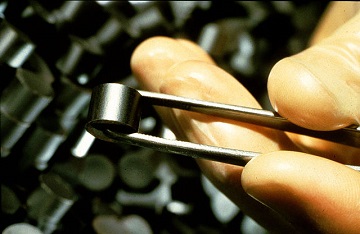 Nuclear fuel is the fuel that is used in a nuclear reactor to sustain a nuclear chain reaction. These fuels are fissile, and the most common nuclear fuels are the radioactive metals uranium-235 and plutonium-239.[2] All processes involved in obtaining, refining, and using this fuel make up a cycle known as the nuclear fuel cycle.

Uranium-235 is used as a fuel in different concentrations. Some reactors, such as the CANDU reactor, can use natural uranium with uranium-235 concentrations of only 0.7%, while other reactors require the uranium to be slightly enriched to levels of 3% to 5%.[3] Plutonium-239 is produced and used in reactors (specifically fast breeder reactors) that contain significant amounts of uranium-238. It can also be recycled and used as a fuel in thermal reactors. Current research is being done to investigate how thorium-232 can be used as a fuel.

Fuel fabrication plants are facilities that convert enriched uranium into fuel for nuclear reactors. For light water reactors, uranium is received from an enrichment plant in solid form. It is then converted into a gas and chemically converted into a uranium dioxide powder.[4] This powder is then pressed into pellets and packed into fuel assemblies. A mixed oxide fuel can also be created when the uranium powder is packed along with plutonium oxide. The hazards present at fuel fabrication facilities—mainly chemical and radiological—are similar to the hazards at enrichment plants. These facilities generally pose a low risk to the public.[4]

When used in a reactor, the fuels used can have a variety of different forms a metal, an alloy, or some sort of oxide.[3] Most nuclear reactors are fueled with a compound known as uranium dioxide. This uranium dioxide is put together in a fuel assembly and inserted into the nuclear reactor—where it can stay for several months or up to a few years.[5] While in the reactor the fuel undergoes nuclear fission and releases energy. This released energy is used to generate electricity. Neutrons released during the fission process allow for a fission chain reaction to occur, allowing energy to be generated continually. The fuel is removed from the reactor after large amounts of the fuel—whether it is uranium-235 or plutonium-239—have undergone fission. The "used" nuclear fuel is known as spent or irradiated fuel. After use, the fuel must be cooled for a few years as it is extremely hot.[5]

The spent fuel is placed in large, deep pools of water that act as a coolant and a radiation shield. The coolant property allows the water to remove the decay heat and the shielding abilities protect workers from the radioactivity of the fuel.[5] After cooling, the fuel can be re-purposed or sent to storage depending on regulations.

For more information on how spent fuel is dealt with, see nuclear waste. For a more in depth explanation on how exactly fuel is obtained and used, see the nuclear fuel cycle.

Nuclear reactors are powered by powdered uranium dioxide that has been compressed into small pellets, shown in Figure 1. However, a power plant requires many of these pellets to run. Thus large numbers of these pellets are bundled into a fuel rod.[6] A single uranium fuel pellet, only as big as a fingertip, contains as much energy as 481 cubic meters of natural gas, 807 kilograms of coal or 564 liters of oil.[7] These rods are composed of numerous pellets of fissionable uranium fuel and can be several meters in length and about a centimeter in diameter.[5] Then several of these rods, generally a dozen or more, are held together by strong metallic brackets in a fuel assembly. These rods are not bunched tightly together, rather there are several millimeters between each rod to allow coolant to flow between them.[5] The tubes containing the pellets of uranium are generally composed of zirconium.[6]

Advantages and Disadvantages of Nuclear Fuels

Worldwide, there are extensive reserves of uranium left to mine. While nuclear fuel is not renewable, it is sustainable since there is so much of it. It will run out eventually, but not for centuries. Unlike fossil fuels, using nuclear fuels to produce energy does not directly produce carbon dioxide or sulfur dioxide. It should be mentioned that the processes of mining, transporting, and refining the fuel have carbon emissions associated with them,[2] comparable to those of wind and solar power. Although the carbon footprint of using nuclear fuels is smaller, there are still disadvantages of using nuclear fuel. The waste, while a much lower volume must be handled very carefully because of its radioactivity. Nuclear fuels require far more complicated systems to extract their energy, which calls for greater regulation. These complex systems and regulation make for very long build times. In addition, public opinions on nuclear energy tend to be more negative than with other energy sources. The over-estimation of the dangers associated with releases of radioactive material is a significant issue, as large-scale nuclear incidents are rare.[2]