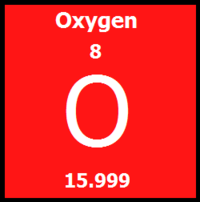 Oxygen exists in two elemental forms: molecular oxygen (O2) and ozone (O3). It also exists in countless compounds with other elements. Compounds of oxygen are called oxides. Some examples of common oxides are minerals such as granite and quartz (oxides of silicon), rust (oxides of iron), and limestone (oxide of calcium and carbon). Many organic compounds also contain oxygen atoms in their structure. Read more about the chemistry of oxygen at the Chemistry LibreText.

Figure 2. Oxygen makes up a large part of the world we live in, both the ground and sky.[4]

Oxygen makes up 46% of the Earth's crust, largely as silicates, compounds of oxygen and silicon. [5] Oxygen also comprises around 21% of the atmosphere as molecular oxygen and ozone.

Ozone (O3) is a pollutant near the Earth's surface, but is a vital component of the stratosphere, as it forms the ozone layer - a blanket of ozone that shields the planet's surface from ultraviolet radiation. Ozone forms naturally in the atmosphere, but can be destroyed by reaction with certain pollutants. In some areas, the depletion of ozone has created an "ozone hole" - a serious concern for the environment.[6]

Molecular oxygen (as O2) is essential for life. Many organisms require oxygen for metabolism, and photosynthetic plants produce oxygen as they convert sunlight to stored energy.

Molecular oxygen is important for combustion - especially in the combustion of fuels for energy. Combustion is the reaction of a compound with an oxidant, which is usually molecular oxygen, to produce oxides.

Combustion of fossil fuels such as methane, shown in Figure 3 below, produces carbon dioxide, water vapour, and energy. Fossil fuel combustion supplies around 95% of the world's primary energy.

The video below is from the University of Nottingham's Periodic Videos project.[8] This video talks about oxygen, but also discusses ozone.