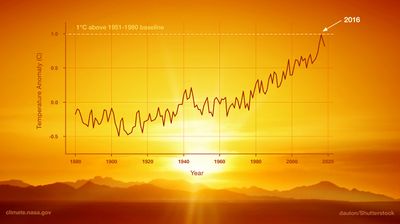 The planet is certainly warmer than it would be without the greenhouse effect, see here for details. The temperature of the Earth has been going up in recent decades (see figure 1), and this warming will cause an increasing number of problems for people around the world in the decades to come.

Humans use energy to maintain a high energy society that provides a good quality of life. As the world becomes more developed, the demand for energy services increases worldwide, and the demand for energy goes up as well. This means the amount of energy that people use keeps increasing (see the pages on the BRIC and N11 countries for great examples of this). Unfortunately, most of the world's primary energy comes from fossil fuels, which is why climate change is so hard to stop.

There are lots of fossil fuels left. In fact, the biggest problem the world is facing is that fossil fuels aren't going to run out anytime soon! We have enough to continue burning these fuels for decades to come. However, it will continue to induce problematic global warming, and climate change in general.