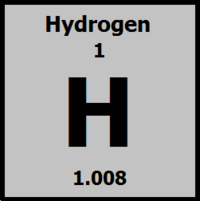 Hydrogen is the 1st element on the periodic table of elements, and is the most abundant element in the universe: it makes up 75% of the total mass of all of the elements in the universe.[2] Some of its properties are listed below:[3]

It is the raw fuel that stars like our Sun "burn" in the process of fusion. This process gives off energy in the form of electromagnetic radiation (light) with some eventually reaching the Earth providing the heat and energy needed for life. The same process is being studied by scientists in hopes of making it a source of power for humanity.[3]

Hydrogen plays an incredibly large role in the workings of stars, but is also of vast importance on the Earth. It is rarely in its free state on Earth, instead it combines with many elements to form molecules that are important for life. Some of these include water, hydrocarbons like methane and propane, glucose, and ammonia.

Hydrogen is a key component of fuels such as coal, natural gas and oil, due to its inclusion in the primary molecule that they are composed of: Hydrocarbons. In these, hydrogen bonds with carbon in many different combinations, and these molecules can be burned in the presence of molecular oxygen to give useful energy. This process is shown in Figure 2, and the hydrogen goes from being a part of the hydrocarbon to combining with oxygen to form water vapour. The process below shows the burning of methane, but there are many different hydrocarbons that can make the same reaction happen, however the amounts of CO2 and H2O will be different. This process supplies the world with most of its primary energy - around 95%.[4]

Hydrogen as a fuel

Hydrogen in its molecular form (H2) is possible to use as a fuel, providing useful energy. While hydrogen is an energy currency, rather than an energy source, it is still considered to be a fuel. It requires "burning" in the presence of molecular oxygen, and this process creates heat which can be used for work. The only by-product of this reaction is water and some nitrogen oxides.[6]

Since hydrogen in this form does not occur naturally on Earth, it must be made by inputting energy. There are many ways of producing hydrogen fuel, such as the process of electrolysis using hydroelectricity, solar power, wind power, and nuclear power.[6] The global hydrogen industry produces more than 50 million tonnes of it each year.

Besides combustion in an engine, hydrogen fuel can also be stored for use in fuel cells, so it can be used much like a battery in which it can convert its energy into electricity. These are used in cars and buses, with the operation of such vehicles being essentially emission-free.[7] A fuel cell has larger energy density than lithium-ion batteries by volume and mass, and is also 2 - 3 times more efficient than traditional internal combustion engines.[7]

Hydrogen makes an excellent fuel for many reasons:[6]