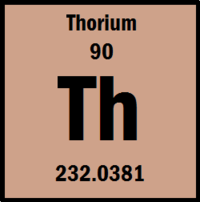 Thorium is the 90th element on the periodic table, the second heaviest element on Earth. Thorium is known for its potential to provide nuclear energy in nuclear reactors, much like uranium which is the current dominant nuclear fuel. It was discovered in 1828 by Swedish chemist Jons Jakob Berzelius, who named it after Thor, the Norse god of thunder.[2] Only one isotope of thorium is found in nature, that being Thorium-232.[3]

Thorium is a "fertile" element, which means that when it absorbs a neutron it will undergo a series of nuclear reactions until it becomes a "fissile" isotope, in this case it becomes Uranium-233.[4] This Uranium-233 can then be used as a nuclear fuel, as it decays providing energy that could be used within a reactor.

Thorium is around 3 times more abundant than uranium in the Earth's crust, with a concentration of 9.6 parts per million.[4] In countries such as India and China, the amount of thorium resources is much larger than the amount of uranium they have, so the development of thorium as a part in nuclear fuel is an area of great interest.[5]

Thorium as a fuel 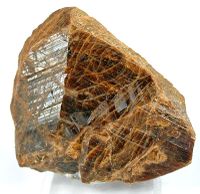 Figure 2. Thorium is contained in and produced from monazite, a naturally occurring mineral.[6]

In order to be used as a fuel to generate electricity, thorium must go through transmutation by the absorption of a neutron. Uranium-233 is the useful by-product of this, as it is fissile and can sustain a nuclear chain reaction. Once Uranium-233 is produced it can either be chemically separated in order to be made into a new fuel or used directly in the same form, such as in molten salt reactors.[2] CANDU reactors can currently burn thorium as fuel, if mixed with uranium, however the CNSC has not yet licensed this. There's so much uranium available in Canada there's no reason to bother.

Similarly to Uranium-238, a neutron is needed for thorium to initiate the transformation of it into a fissile fuel. A 'driver' needs to be used for this in order to provide these neutrons, which can be Uranium-233 or 235, or Plutonium-239, all of which are hard to supply. Reactors operating using thorium use uranium as this driver, so they are known to run on the Thorium-Uranium (Th-U) fuel cycle.[7]

The Th-U fuel cycle has some intriguing benefits to it compared to the most common reactors which use the Uranium-Plutonium cycle.[7] First off, it can be used in thermal breeder reactors, whereas Uranium cannot.[2] This means if the spent fuel is reprocessed, it will not require a Uranium-235 driver again, since breeding produces more fissile fuel than was originally used (Visit the breeder reactor page for more detail). Uranium-238 can be bred as well, however it requires a fast breeder reactor, which has increased complications.[7] Secondly, Th-U fuel doesn't produce any transuranic elements since there is no Uranium-238 being irradiated to harmful elements such as Plutonium, Americium, Cadmium, etc.[7] This makes thorium waste much less harmful on larger timescales.

The use of thorium as a fuel has some drawbacks as well. Extensive experience with thorium in the nuclear industry is very rare, mainly due to the steady use of uranium as a fuel, but also because experimental projects are not as easily funded as already proven ones. Thorium is also a bit harder to prepare, as high temperatures are needed to produce solid fuel. Liquid fuel, as used in a molten salt reactor however do not run into this problem. Another drawback is the gamma decay involved in the Th-U cycle, as some daughter nuclei have associated gamma decays which are hard to shield and therefore cost more money to do so.[7]

Thorium for the future of nuclear

Thorium has lots of potential for the future of nuclear power, however there are many misconceptions to how much potential it has.

Another benefit is its use in molten salt reactors (MSR), one of the six Generation IV nuclear reactors, however MSRs are not exclusive to thorium as many people think; they can and have used uranium as their fuel, with the first MSR research reactor operating with dissolved Uranium-235 tetrafluoride (UF4).[8] Thorium-fueled molten salt reactors are often referred to as Liquid Fluoride Thorium Reactors (LFTR).

Thorium does have its advantages in an MSR though. MSRs can process decay products due to their use of fluids rather than solid fuels. This is useful because when Thorium-232 absorbs a neutron it beta decays to Proactinium-233, which has a half life of 27 days, and could absorb neutrons in the reactor which is unwanted. Therefore the Proactinium-233 can be removed, allowed to decay to Uranium-233 (the desired fissile fuel) and then reintroduced to the reactor at a later time.[9]

There is lots of optimism for thorium, especially within MSRs, and research and development is being pursued by many countries around the world, including Japan, Russia, China, India, France, and more.

The video below is from the University of Nottingham's periodic videos project.[10] They have created a complete suite of short videos on every element on the periodic table of elements. The energy education team disagrees with the statement in the video that there is a relatively scarce amount uranium in the world.[11] Also, the implication in the video that uranium and plutonium were used in nuclear power plants because of wartime use is questionable.