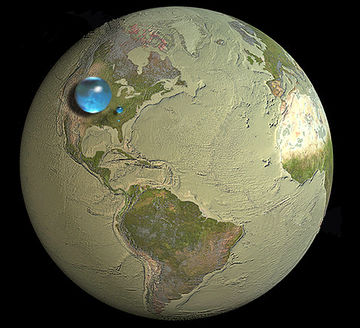 Water is a molecule made of one oxygen and two hydrogen atoms. Water is the most important chemical for life on Earth. Water makes up a large portion of every living being therefore every living creature needs water. This is why water is important for irrigation of crops, the health of livestock, as well as direct human consumption (drinking, washing, etc.). Water is also an important part of the conversion of primary energy into energy services (please see water use in energy systems).

As seen in Figure 1, there's a large amount of water on Earth, but most of it is saline—commonly known as salt water. This water is not suitable for drinking, thus it is not consumed by humans. Most of the fresh water needed for life is locked up in the cryosphere (glaciers and permanent snow packs), while the majority of available fresh water is stored in groundwater. The smallest of the three bubbles on the picture is the surface water; the water that humans can directly access at the Earth's surface. Since there are such small amounts of this consumable water available, water pollution is a concern. In some parts of the world, the lack of access to clean, fresh water is a serious issue. 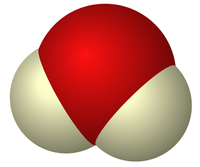 Figure 2. Water molecule, made up of two hydrogen and one oxygen atom.[2]

The water molecule is one of the lightest molecules that exist (although there are several that are lighter), and it's certainly the lightest molecule that forms a liquid on Earth. Water forms a liquid at room temperature because it has such a strong electric dipole. Water has just about the strongest dipole moment of any molecule because of it's small size. This dipole nature means that the hydrogen in the water is strongly attracted to electrons around the oxygen, called hydrogen bonding. This hydrogen bonding of water is not just what makes water a liquid—but what makes it a powerful solvent through these electric interactions. This allows many important chemical reactions to occur in water.

Water exists in three phases on earth, liquid water which is the most abundant, solid water (referred to as ice) and water vapour which is the gaseous form.

Water and the Climate

Water has a huge effect on Earth's climate and is a major factor in weather as well (see climate vs weather for the difference). Weather often includes precipitation like rain, snow, and hail. Clouds are made largely of small water droplets or frozen crystals. Water vapour is also the greenhouse gas with the biggest effect on the temperature of the Earth, and it has an amplifying effect on the global warming from carbon dioxide (CO2). In other words, water vapour itself doesn't drive climate change, however, amplifies the effects since more CO2 means more water vapour will be in the atmosphere.

Too little water causes droughts, which are a problem. Too much causes flooding, which is also a problem. One of the biggest concerns about climate change is that it will affect how much water will be in different parts of the world. This has been summed up as "the wet will get wetter and the dry will get drier". Please see climate change impacts on water for more details. Completely separate from climate change, there's quite a bit of concern about water pollution from things like acid rain.

Water moves through various systems on the planet taking different forms and being transported by different methods including evaporation, condensation, melting, freezing, sublimation and just plain water flowing. This motion of water throughout the planet is referred to as the hydrologic cycle.